Church of Our Lady of Piety at Khanvel

Our Lady of Piety Church at Khanvel, Silvassa came into existence at the behest of the Portuguese who had this beautiful church built in the latter part of the eighteenth century. While the exact period is not documented it is believed that the church came into existence around the time period of 1886 to 1889. 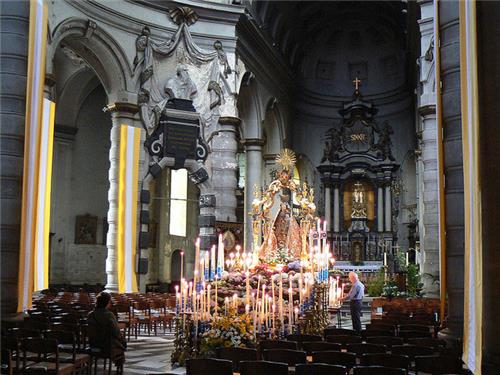 Architecturally, the church is among some of the most beautiful edifices constructed in the Christian world’s sanctified buildings. The Church exteriors as well as its well appointed interiors are the cynosure of all eyes. Especially the interiors are bedecked with a large quantity of embellishments. Some of the areas simply takes ones breath away as they are so artistically done with an unequaled sense of proportion and delicacy of treatment. In terms of antiquity this is also among some of the oldest churches standing in the region around Silvassa. It is all the more remarkable for its skillful rendition of cornices, steeple externally and the wonderfully laid out alter  with ample space for the piano organ and choir.

Situated in the heart of Khanvel the Church is visited by a large number of devotees every year. There are also an almost equal number of tourists who visit the Church for its aesthetic appeal and wondrous skill of adornment.

The church stands right opposite to the Tribal Museum that houses the relics of the Tribal past of the area.  Because of the several other churches constructed by the Portuguese in the vicinity of Khanvel  to serve as a poignant reminder of  the centuries of rule that had been imposed upon the Indians.

The best time to visit the church is during the six months of February, March, April, May, June and early July that is just before the onset of the monsoon season. It has been known to be open all the year around but visitors and pilgrims prefer to go there during the above six months. The timings for visiting the church are from seven o’clock in the morning to seven o’clock in the evenings. These timings are applicable on all working days, as well as weekends including on Sundays. No special timings are allotted for any special occasions or religious or public holidays. However there is strict restriction on the entry of pets.

The Church of our Lay of Piety can be approached by rail and road. The nearest railway station is located at Vapi which lies at a distance of about 55 kilometers from Khanvel. As the roads network is good there are a number of buses and taxis commuting from Vapi to Khanvel. Access to the church can be made directly as disembarking from the train and boarding a taxi is a smooth and unhindered process. The nearest airport is at Mumbai from where trains or taxis can be availed off for reaching Khanvel. It can also be reached by boat from the water front.

Explore more about Tourism in Silvassa